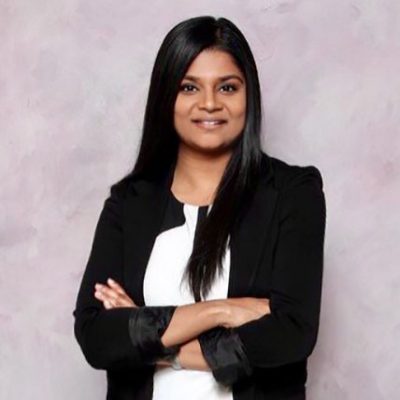 Mathura obtained a Bachelor of Arts (Honours) and a Master of Arts in Interdisciplinary Studies from York University and her law degree from the University of Windsor. During her time at law school, Mathura was a member of the Pro Bono Students of Canada and participated in a project aimed at making the banking industry more accessible for marginalized communities. Mathura also participated as a classroom facilitator in the Windsor High School Outreach Program, encouraging young students to pursue careers in the legal field. Mathura has a passion for advocacy and was awarded a distinction for her first year Legal Research and Writing Moot.

Prior to joining Wood Gold LLP, Mathura was a student-at-law with the Ministry of the Attorney General. During her time as a student, she worked at the Legal Services Branch of the Ministry of Children, Community and Social Services to assist with the drafting and implementation of legislation relating to the fundamental transformation of Ontario’s child welfare system with the goal of more accountable, responsive and accessible child, youth and family services. Upon being called to the bar of Ontario in 2017, Mathura was hired back as Crown Counsel, where she continued to contribute to the modernization of family law legislation and developed an interest and expertise in the area of child welfare and child protection. During her time with the branch, she also represented the interests of Ontario Disability Support Program recipients in their pursuit of child and spousal support, in conjunction with the Family Responsibility Office.

Mathura continued her commitment to public service as Crown Counsel at the Legal Services Branch of the Ministries of Education and Training, Colleges and Universities where she routinely provided strategic advice and litigation support in various complex matters relating to human rights, labour and employment.

Mathura’s practice is built on hard work, patience, and a solid understanding of the challenges faced by families. She has strived to ensure that her clients receive the highest quality of services to achieve the best possible outcome by recognizing that legal issues are often compounded by non-legal concerns. Mathura can also offer legal services in Tamil.

In her spare time, Mathura has been a volunteer with the Big Brothers Big Sisters of York in various capacities. She also enjoys spending time with her family and eating her way through all of the different cuisines the GTA has to offer.

We are proud to announce that Cynthia was selected  as the recipient of the Governor General’s Gold Medal. The Faculty of Graduate Studies received a number of nominations for this award, and this recognition demonstrates Cynthia's outstanding achievements during her graduate studies in the Interdisciplinary Studies Programme at York University.

Cynthia is presently doing her PhD at Oxford University.

November 28, 2018
Interdisciplinary Studies is once again proud to announce that Muna Ali has successfully defended her Master's thesis entitled: “Anchored in Our Culture, Focused on Our Future": Negotiating Spaces for Somali Women in Toronto through Gashanti Unity"

September 18, 2018
Interdisciplinary Studies is once again proud to announce that Muna Ali has successfully defended her Master's thesis entitled: “Anchored in Our Culture, Focused on Our Future": Negotiating Spaces for Somali Women in Toronto through Gashanti Unity"

Muna's thesis was passed with no revisions.

Cynthia's thesis was passed with no revisions.

Thrmiga's thesis was passed with no revisions and she will be graduating in October 2018.

Sam’s thesis was passed with no revisions and she will be graduating in October.

Title: ‘Having the Ancestors’: Affective Embodiments as Decolonization Praxis. Auto-ethnographic Accounts of an Anomalous Izangoma

Abstract: Izangoma, or diviners, are one type of traditional healer in Southern Africa. Despite colonial efforts to delegitimize and criminalize traditional healing and medicine, there are 300,000-350,000 traditional healers in South Africa alone (Decocteau, 223.) Central to the Nguni Izangoma worldview is ancestral veneration. Ancestors are not only respected, mediated and honoured through ceremonial practices, but also through trance processes. ‘Having the ancestors’ refers not only to those ‘called to heal’ but also to the embodiment of ancestors through co-performative and nuanced socio-cultural processes. Using autoethnographic and narrative writing practices, this interdisciplinary thesis explores the dynamic affective embodiments of ancestors, and how Izangoma trance processes, which includes embodied writing practices, informs a revaluing, acknowledging, meditating and resituating of suppressed narratives (Taylor, xvi.) These methods of inquiry and research practices are therefore not just crucial to reconciliatory endeavours but are also synecdochic of the process of decolonization and healing

CONGRATULATIONS to our Graduands, Maxwell Ranasinghe, Terri Raymond, Hana Gartner and Emmanuel Osaze, who have successfully defended their theses. It is with great sadness, that we at Interdisciplinary Studies, announce the passing of our beloved founder, colleague and Executive Member, Dr. Christopher Innes.

Dr. Innes provided IS students a great opportunity to pursue independent and innovative research in a wide range of interdisciplinary topics. He worked relentlessly to create the program by visiting all the different departments in all faculties to promote his ideas for the program and after a great deal of hard work on his part, the program was founded in 1972.

An intentionally small program that attracts high quality students, with far reaching scholarly interests and perspective, the MA thesis includes combinations ranging from fine arts, creative writing, sciences, law, social sciences, humanities, neuroscience, health and business. Each student has to enroll in three different disciplines and work with three scholars who supervise them in their field of research. They have to have their supervisors in place, before they are admitted to the program

Dr. Innes will be sadly missed by all of us at Interdisciplinary Studies. His idea in creating this program was pure genius.

Congratulations are extended to

Congratulations are extended to

for successfully defending their Interdisciplinary Studies Thesis this June. Alejandro Mayoral Banos was interviewed by the Toronto Star. Check it out thestar.com for the whole article.

Lord Dufferin, Canada’s third Governor General after Confederation, created the Academic Medals in 1873 to encourage academic excellence across the nation. Over the years, they have become the most prestigious award that students in Canadian schools can receive. Medals are presented on behalf of the Governor General by participating educational institutions, along with personalized certificates signed by the Governor General. Leva Rouhani's work - "Girls' Schooling Experience in Frankadua, Ghana: A Case Study"was nominated by her committee and the GPD for having demonstrated “distinction in scholarship at York University."  This thesis and it's related field work serves as an exemplar for IS and while it was an MA it was enacted, analyzed, written and defended at the equivalent of a  PhD level. There are only two awards per year - one at the Masters and one at the PhD, and Interdisciplinary Studies - the little program that we are - now boasts THE award winner for an MA. A big shout out to Leva's supervisors for their interdisciplinary guidance and support - IS thanks  Minoo Derayeh, Pablo Idahosa and Livy Visano. Leva - you are off doing your PhD in Ottawa  now but IS wants you to know how proud we are of you.  All the best.

IS Supervisor, Alum and Executive Member John Greyson Emulates the IS pay-it-forward ethos

Talk about a pay-it-forward way of being in the world!

That's what IS at YorkU strives to emulate and IS supervisor, alum and executive member

John Greyson has demonstrated this life ethos in a big way.

Together with his partner Stephen Andrews, YorkU IS's own (ok and Film's 🙂 ) John Greyson has donated land to Parkdale Land Trust for a wonderful community garden. IS is pleased to announce the In the early 1970s, Professor Christopher Innes, while a relatively new assistant professor, had the tenacity and foresight to understand and promote the value of interdisciplinary studies within academe. To that end, he championed this concept and innovative approach - meeting with people in every nook and cranny at York; ushered his proposed MA program through every decision-making body and ultimately convincing all of it's necessity and value at YorkU's Senate where in 1972 it was approved.

It was the first graduate program of it's kind in Canada.

The Christopher Innes Interdisciplinary Studies Champion Award is meant to affirm these same values in both students and supervisors affiliated with the program.

Student recipients will have achieved an exceptional academic record of achievement within the IS MA program, have exemplified strong, original and rigorous interdisciplinary  research and have demonstrated a steadfast commitment to the health and vibrancy of the IS program and community.

Supervisory recipients will have a record of exemplary supervision of IS students who have achieved exceptional academic records of achievement within the IS MA program, worked diligently to ensure strong, original and rigorous interdisciplinary research and have demonstrated a steadfast commitment to the health, strength and vibrancy of the IS program and community.

IS Student Rebecca Barnstaple in the News

IS Supervisor and Past Executive Member wins FGS teaching Award!

The Faculty of Graduate Studies (FGS) honoured two professors for substantial, significant and sustained excellence, commitment and enthusiasm to the multi-facted aspects of graduate teaching at York University. “Celia’s extraordinary work in the classroom, on supervisory committees, as a mentor to students present and past, and finally as a guiding force in the many programs with which she is affiliated, all mark her an exemplary member of the graduate community at York,” said Lenton.

Lenton commented that Haig-Brown’s stellar record of teaching, mentorship and commitment to graduate education has influenced multiple cohorts of scholars and teachers, as reflected by one of her nominators who said “her teaching has transformed the way we engage with social justice as a lived path”.

“It is my sincere pleasure to congratulate Celia on this award in recognition of her profound commitment to students and to graduate education at York University,” said Lenton.

Besides Education, Dr. Haig–Brown is affiliated with the graduate programs in Environmental Studies, Gender, Feminist and Women’s Studies, Humanities, Interdisciplinary Studies, and Social and Political Thought. She has supervised the completion of 11 doctoral dissertations and more than 30 master’s theses, and has sat on more than 30 PhD and more than 70 master’s supervision committees during her academic career.

Letters of support for Haig-Brown’s nomination of the award, many from former students, noted her wide influence on their pedagogical approaches, her quality of critical attention, and her powerful intellect and knowledge.

Upon accepting the award, Haig-Brown thanked all of her students, saying, “Our time together is one of the sweetest an academic can experience. Ultimately this award is representative of the incredible work by my students.”

The FGS Teaching Award is bestowed annually on a member of the Faculty of Graduate Studies who has displayed substantial, significant and sustained excellence, commitment and enthusiasm to the multifaceted aspects of teaching at the graduate level. Stay Up To Date With Interdisciplinary Studies Newsletters

There are no upcoming events.